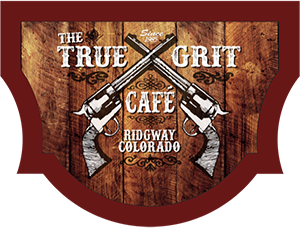 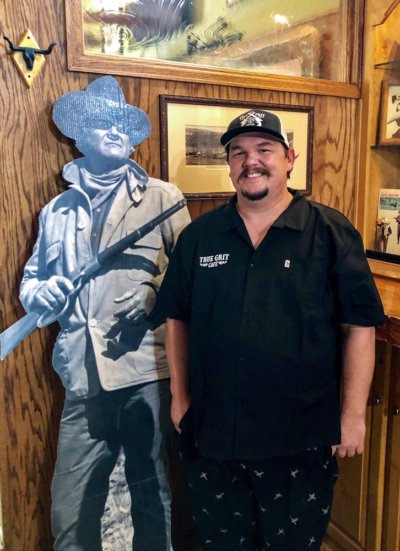 In August, Robert celebrated his one year anniversary at True Grit Cafe and he said he couldn’t be happier serving delicious, homestyle cuisine to the community. “I have developed an indescribable bond with the Grit and this place has become my life,” said Robert. “I love being able to get in [the kitchen\ and create things like specials or new items for catering. I have generated a love for this place and the challenges excite me too.”

It was Robert’s love of the outdoors that brought him from his home state of Mississippi to the Western Slope of Colorado. “I also have family in Colorado and my girlfriend Vicki and I were looking for somewhere to move in Colorado,” said Robert. “We didn’t really want the busy Denver lifestyle. We had done big city living most of our lives, so I spoke with my dad and brother and they both said the Western Slope is one of the prettiest areas in the state.”

One day, Robert’s dad told him that one of his favorite places to eat was at True Grit Cafe. As Robert and Vicki started job searching in the area, his dad informed him that The Grit was hiring for a kitchen manager.

“I sent Miss Tammee my resume and was super excited to set up an interview,” said Robert. “When we spoke I knew immediately I wanted to be part of the True Grit Cafe. I ended up getting the job and started doing everyday line cooking and prepping and within a month I had taken on the inventory and a few weeks later I was running the kitchen and loved it.”

It wasn’t long before the family feel at True Grit Cafe resonated with Robert and he knew he was where he wanted to be. “The most rewarding aspect of the job for me is seeing the happiness our product, staff and the establishment brings to so many people and locals from all over the world,” said Robert. “For example, knowing that a young family came from Denmark to eat at the Grit, if that doesn’t make you feel all kinds of good inside then nothing will. It gives me great pride in what we do.”

Part of what draws people to True Grit Cafe is the fact that there is also history attached to the building and to the surrounding community of Ridgway. “If people do come for the history of the building and decide to grab a bite to eat [it’s great],” said Robert. “If we can get you to eat at the Grit, I know you’re coming back. It’s our goal to keep it that way.”

Robert was born in Clarksdale, Mississippi and at age 9 moved to Brandon, Miss. which is a suburb of Jackson. He started cooking at a young age with his Uncle James or Uncle “Buddy.”  “When I was younger, whenever we were eating as a family, Buddy was in the kitchen manning the grill,” said Robert. “He always had me in there with him and we had a blast. Of course, I was just a kid and had no clue preparing food would become my career and passion.”

Robert said that in Mississippi you could get your driver’s license at the age of 15 if you had a job. So on his 15th birthday, he went and got a job at a local catfish house. From there, his career path was set, he said.

Like most industries, the food and service industry is always shifting and faces new challenges. But Robert said that he never runs from a challenge. “The rising minimum wage, utility rates spiking, and the employment pool [are some of the challenges we’re facing],” said Robert. “It’s hard managing these things while still being able to provide an affordable product.”

Despite the challenges that come with helping to run a restaurant and a kitchen, Robert and the True Grit team remain stronger than ever and support each other. “We all lift each other up,” said Robert. “We no longer have the “that’s not my job” mentality. The crew is more like a team – a family now. Just a few weeks ago the General Manager, Juice, and myself had a Grit fantasy football live draft and it was so much fun. I absolutely love the dynamic and my crew that I have now.”

Although it has only been a year, Robert has exemplified what it means to be a leader for the True Grit family. “One of my favorite memories was walking into the Grit for the very first time,” said Robert. “Meeting Tammee and knowing almost immediately that this was home. I know it sounds cliche, but it is true.”

We thank Robert for his hard work and dedication as our Kitchen Manager. True Grit Cafe is currently hiring for someone to join the kitchen crew. To learn more call the restaurant at 970.626.5739