The San Juan Mountains are magnetic. They attract people from all over the world who appreciate nature and the robust richness it adds to life. Sometimes people seek out those mountains, other times, life brings them together.

For Richard “Juice” Pinney, True Grit Cafe’s new general manager, it was all the above. “I chose Ridgway, but actually Ridgway chose me.”

Before making the move from New Orleans, Louisiana to Ridgway, Juice worked as the co-owner and general manager of the southern casual dining restaurant, Galliano.

“The restaurant was doing well, but an accumulation of things weren’t making me happy,” said Juice. “One day I started talking to two friends of mine and told them how I felt like I was in a rut. There were a lot of things shifting in New Orleans and I didn’t like feeling like I always had to look over my shoulder.”

With his friend’s encouragement to try something new, Juice began researching locations where he’d want to live.

“I was looking at places like Wyoming, Montana, Washington, Northern California that had great climbing,” said Juice, “but of course I was also looking for a restaurant that I thought would be a great fit.”

Part of the appeal in moving to Ridgway is that Juice is a backpacker. While he lived in New Orleans he would drive 8-12 hours to get to southern Arkansas or Tennessee for mountains.

“I would have to take a week off from work just to go backpacking,” said Juice. “But now, I don’t have to do that. On my days off I can just grab my dog Finn McCool, head out on a hike and be back by sundown,” he said.

After coming across True Grit Cafe’s job posting for a general manager, Juice reached out to True Grit Owner, Tammee Tuttle. The two hit it off and decided that Juice would come out for a face-to-face meeting and a trial run during Mother’s Day weekend.

“Tamme and I found that we have similar values when it comes to running a restaurant,” said Juice. “We want a place where people can have a good time, where they’re taken care of. We don’t necessarily care about the almighty dollar, we just want to create a great environment for customers.”

During the five-day trial run, Juice impressed Tammee with his “jump-right-in,” attitude, and it was clear that he would fit in with the True Grit Cafe family.

“One thing I take pride in is that I don’t ever ask my employees to do something that I wouldn’t do,” said Juice. “By the second day, I was wiping down counters and making sure the staff knew that I didn’t feel like I was better than any of them.”

The town of Ridgway quickly befriended Juice and he talked about his excitement and awe at how the community is so open, friendly and welcoming.

“That’s why I thought it was so crucial for me to live in Ridgway,” said Juice. “I want to walk down the street and be able to say hello and make connections with people so that they know me. Since moving here at the beginning of the month I have already met a ton of great people here.”

If you witness Tammee and Juice’s interactions it is clear that they make a great team. She expressed excitement at her ability to learn from his 20 plus years of experience in the restaurant industry and is excited to have a support system in the restaurant.

“I thought Tammee and I were a great fit,” said Juice, “and now that I’ve seen how friendly the people are I am even happier with my decision to move here.”

Juice said he also wants to bring True Grit Cafe’s “Ranch To Fork” identity to the forefront of the restaurant.

“My goal at True Grit Cafe is to really help move it forward,” said Juice. “I want to maintain the menu favorites that keep the locals coming back, and I also want to incorporate new dishes that will help elevate True Grit Cafe.”

As the True Grit team gears up for summer, it will be an exciting time for Juice to experience Ridgway and the surrounding areas during its busiest time.

“So far it has been great,” said Juice, “and I just know that I will continue to love it here.” 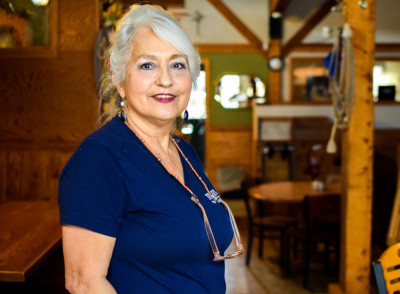 If you’ve ever dined at the True Grit ​Café, odds are you’ve met one of the restaurant’s long time employees, Donnis Parrie. A bright-eyed, warm woman who will greet you with a friendly “how are you doin” in a slight Southern drawl.

With beautiful silver hair and glasses that she wears hanging around her neck, Donnis’ welcoming smile and demeanor immediately make you feel at ease and at home.

Donnis has been working at the cafe for 18 and a half years and has become an important piece in the foundation of the restaurant.

“I moved to this area in 1999 from Carbondale, Colorado where I had been working as a manager/server at a restaurant,” said Donnis. “After a short stretch of working for a smokehouse in Colona that eventually closed down, I decided in August of 2000 to apply for a job working for True Grit ​Café. To my excitement I got the job!”

During her first two weeks of training Donnis recalled sitting guests on a deck that at the time was located behind the kitchen at the back of the restaurant. ““I remember how funny it was having to walk people through the kitchen and out to the seating deck behind the restaurant,” said Donnis. “But that was my station and I loved it.”

Donnis is no stranger to the restaurant and hospitality business. She was born and raised just south of Houston, Texas. At the age of nine her mother began working as a bartender and soon after opened her own business, where Donnis gained hands on experience.  At the age of 21 she moved to Houston where she lived for 15 years before moving to Colorado.

“I definitely got my work ethic from my mother,” she said. “I started working at a young age in our family business. I really didn’t learn what it was like to work with or for someone else until  moved to the city. I was a cocktail waitress for big companies, and it really taught me a lot.”

Donnis’s work ethic and positive attitude is part of what has made her so loved at the True Grit Café and in the community.

“She is literally a ray of sunshine,” said Tammee Tuttle, True Grit ​Café Owner. “Everytime she walks through the door she chooses to be happy and she chooses to be positive. I know what she has gone through in her personal life from the loss of loved ones and more, yet everyday she still makes that choice to be positive and it’s truly inspirational.”

Tammee explained how Donnis is always serving as an example to the young employees that work at the restaurant. “Donnis doesn’t say ‘I’m not going to do that,’ she does her job and then some. She isn’t too good to do anything. The fact that she teaches those values to our employees speaks to the kind of role model that she is.”

What makes True Grit ​Café such a unique experience for locals and tourists is that you will always find consistency. You will find consistency in knowing that every meal is going to be delicious and thoughtfully sourced, but also in the familiar faces of the people that you will interact with.

“In this day and age when you go to a fast food restaurant you might never see that same face again,” said Tammee. “But Donnis is always here. When she’s gone people want to know where she is and when she’ll be back. A house has to have a foundation and she is part of ours.”

On December 31, 2018 True Grit​ Café celebrated being open for 33 years. Donnis has  experienced a large portion of those years and expressed that although each year is increasingly more busy, she still loves working there every single day.

“Everyday we have our long-time local customers, but we also get new faces that come through the cafe,” said Donnis. “Some are passing through on their way to ski in Telluride, others are just exploring the surrounding towns.”

Donnis said that one thing that hasn’t changed in all these years is that Tammee is still team oriented.  “Everyone really loves each other and genuinely cares about one another,” said Donnis. “It’s like a huge family and it’s part of what has kept me here for over 18 years.”

Donnis’s belief that the staff is responsible for the health of the restaurant as a whole shows in her values. “I always try to encourage people to see the bigger picture,” she said. “Having a good day doesn’t depend on how many tips you have in your wallet. Having a good day is when your customers are happy, when your food comes out awesome, and when you were helpful to your co-workers. Whenever all of those things go right, that’s a good day.”

It’s the people like Donnis and the community atmosphere that make True Grit ​Café the place that it is. “We treat every person like they are special because, well, they are,” said Donnis. “We are all different, but we have an open heart for everyone who walks through our doors. Regardless of age, gender, ethnicity and beyond, you will always be welcomed as part of our True Grit ​Café family.”